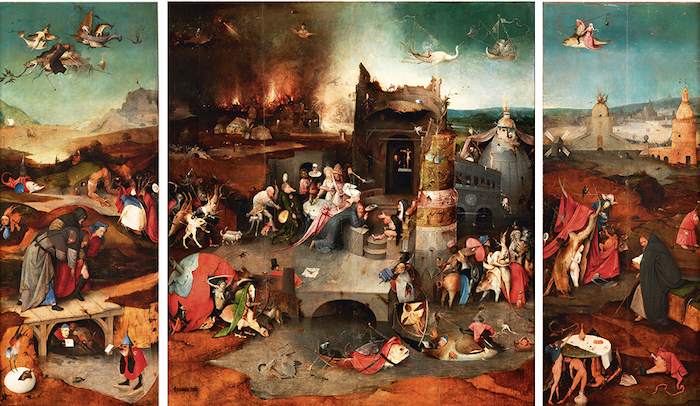 Bringing together a hundred works of art, including paintings, sculptures, tapestries and engravings, a new exhibition in Milan charts the legacy and influence of one of the most imaginative and enigmatic Dutch masters, Hieronymus Bosch (c.1450 – 1516), and adds nuance to our understanding of Renaissance art.

Few artists have become so deeply embedded in our collective imagination as Hieronymus Bosch (c.1450 – 1516).

Born in ‘s-Hertogenbosch, a city in the south of the Netherlands, Bosch rose to prominence around 1480, at the height of the Early Renaissance, for his painstakingly detailed paintings describing the social and political convulsions of his era.

Rife with symbolism and layers of interpretation, much of his work heavily relies on a gruesomely vivid imagery drawn from Christian iconography, one that has secured his lasting fame and set him apart from his peers.

Unlike other Early and High Renaissance masters, such as Leonardo da Vinci (1452–1519), Bosch, a fervent catholic, was in fact less interested in in the revival of Classical learning, in depicting man as the centre of the universe, and more concerned with their ultimate fate.

The artist’s preoccupation with bringing a moralising massage to the attention of the commoner reflects in the sheer brashness of his artworks, where the monstrous and the grotesque overlap and merge into visual exhortations to live a righteous life.

Bosch’s inventive pictorial narrative is populated with allegorical characters, with saints, sinners and temptresses, and with strange beings, bird-headed abominations and other monstrosities that are perhaps more in keeping with the late Medieval tradition than with the Renaissance one.

The exhibition showcases some of Bosch’s most celebrated works, including the The Hermit Saints (c.1495 – 1505), The Last Judgement (c.1500), St. John the Baptist in the Wilderness (c.1495), The Garden of Earthly Delights (c.1500), as well as artworks by other Flemish, Italian, and Spanish masters of the Sixteenth Century to highlight the richness and diversity of Renaissance art.

The show further includes Tríptiko, an audio-video installation by Karmachina – a Milan-based design firm specialising in multimedia storytelling – offering a unique and immersive experience into Bosch’s murky and carnivalesque world.

Among the artworks on display is also the Triptych of the Temptation of St. Anthony (c.1500). Recounting the story of the mental and spiritual torments endured by St. Anthony the Great, the three-panelled painting is possibly one of Bosch’s most defining works. 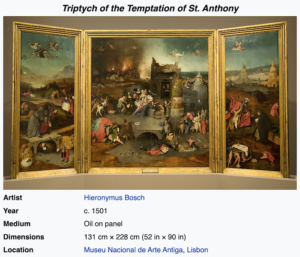 It displays a theme much favoured by the artist, the temptation and loneliness of the just man, chased and hounded by the relentless forces of evil. The work is replete with symbolism and Scriptural references, and it teems with creatures innumerable – demons in holy vestments, anthropomorphic deers, bird-like ghouls with skates, ship-shaped birds, flying fishes and half human-half pig hybrids.

The bizarreness and uniqueness of the scenes are such that we cannot but appreciate Hieronymus Bosch’s greatness as an undisputed master of his time, and acknowledge how modern painting, and the Surrealist movement in particular, is indebted to his oeuvre.

From the 1st December 2022 , it is  possible to register online for the ACE membership 2023

From 1st January 2023, it will be possible to pay the ACE membership fee 2023 in cash at the Library.

We use cookies on our website to give you the most relevant experience by remembering your preferences and repeat visits. By clicking “Accept”, you consent to the use of ALL the cookies.
Cookie settingsACCEPT
Manage consent

This website uses cookies to improve your experience while you navigate through the website. Out of these, the cookies that are categorized as necessary are stored on your browser as they are essential for the working of basic functionalities of the website. We also use third-party cookies that help us analyze and understand how you use this website. These cookies will be stored in your browser only with your consent. You also have the option to opt-out of these cookies. But opting out of some of these cookies may affect your browsing experience.
Necessary Always Enabled
Necessary cookies are absolutely essential for the website to function properly. These cookies ensure basic functionalities and security features of the website, anonymously.
Functional
Functional cookies help to perform certain functionalities like sharing the content of the website on social media platforms, collect feedbacks, and other third-party features.
Performance
Performance cookies are used to understand and analyze the key performance indexes of the website which helps in delivering a better user experience for the visitors.
Analytics
Analytical cookies are used to understand how visitors interact with the website. These cookies help provide information on metrics the number of visitors, bounce rate, traffic source, etc.
Advertisement
Advertisement cookies are used to provide visitors with relevant ads and marketing campaigns. These cookies track visitors across websites and collect information to provide customized ads.
Others
Other uncategorized cookies are those that are being analyzed and have not been classified into a category as yet.
SAVE & ACCEPT